DETROIT — A judge has ordered the demolition of the deteriorating Packard auto plant in Detroit, finding that it had become a public nuisance.

Wayne County Circuit Court Judge Brian Sullivan wrote in an order that the plant’s Peruvian owner, Fernando Palazuelo, and his company, Arte Express Detroit, must remove all rubbish and debris from the sprawling site and demolish all buildings and structures on the property, which covers several blocks on Detroit’s east side.

The March 31 order declared that the more than 30 parcels owned by Palazuelo “are a public nuisance which interfere with common rights enjoyed by the general public by significantly threatening the public’s health, safety and welfare.”

Demolition and abatement work has to start within 42 days of Sullivan’s order, with clean up completed within 90 days. If the work is not completed, the city is authorized to have it done, with Palazuelo possibly being responsible for the costs which are expected to be in the millions of dollars.

The order comes after Palazuelo failed to appear at a March 24 trial.

Built in the early 1900s, the Packard plant was designed by Albert Kahn. The company became a dominant luxury carmaker in the United States in the late 1920s, and by the 1940s had 36,000 employees.

The last auto was made there in the mid- to late-1950s and the various buildings eventually were used as warehouses, other manufacturing and small industrial projects.

The city claimed the bulk of the Packard property in 1994 after former owners failed to pay back taxes. Over time, the site became one of the most blighted areas in the city as tires, thousands of shoes, old televisions and other trash was illegally dumped in and around the various buildings.

Palazuelo bought the Packard property in 2013 for $405,000 at a Wayne County tax foreclosure auction. He said then that his plans were to restore and reopen the 40-acre complex as a mixed-use commercial, residential and cultural development.

Palazuelo told The Associated Press in 2014 that the total redevelopment cost should be near $350 million. It would be paid with rent he receives from his projects in Lima, he said.

But he was unable to assemble the necessary financing for the project and in 2016 asked the City Council to approve a 12-year tax freeze.

The AP sent an email Wednesday to a Palazuelo representative seeking comment from the developer. A voicemail and email also were left for an attorney listed on Sullivan’s order as representing Palazuelo. 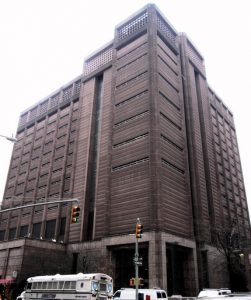