A model lead-safe demolition ordinance — with clear instructions to wet down a structure before and during demolition to control the spread of dust — was unveiled Thursday as part of the ongoing effort to dramatically reduce children’s exposure to lead in the region.

Presented by the Lead-Safe Demolition Working Group formed by the Institute of Politics at the University of Pittsburgh, the ordinance and related recommendations are in a report of the group’s study of demolition policies and practices. Group members included elected officials and representatives of councils of government and housing, public health, children’s and environmental agencies.

Copies of the IOP report will be submitted to the county and distributed to the Allegheny County Lead Task Force, which requested the study; working group members; and members of the Lead Safe Allegheny coalition of agencies and experts, according to Aaron Lauer, IOP senior policy analyst. He wrote the report.

The group researched the most successful practices in other cities, focusing on demolition requirements in East Baltimore, Md., Portland, Ore., and Detroit. Protective measures have been found to reduce the amount of lead dust spread from demolitions. 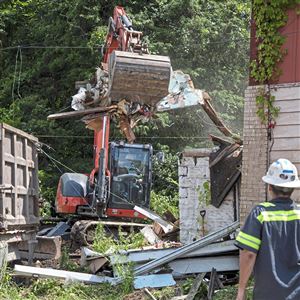 “We identified those three models as best practices around lead-safe demolition,” Mr. Lauer said. “We tried to adapt those three the best we could around the Western Pennsylvania paradigm.”

The three cities have rules on what is to be done before, during and after demolition; East Baltimore and Portland also have rules for deconstruction — hand removal of lead-containing materials before demolition. East Baltimore’s is considered the most strict and is estimated to add about 25 percent to demolition costs.

Not an ordinance, Detroit’s requirements are listed as specifications when the city seeks bids for demolition jobs.

“The report is timely,” said IOP Director Samantha Balbier, “because of the extent of blight in our county and our region, the amount of demolition that’s occurring in communities right now.”«

As background, the report gives updated information about elevated blood lead levels, older housing stock and the status of blood lead testing of children in southwestern Pennsylvania (Alegheny County has had universal testing since Jan. 1, 2018). It reviews the sources of lead exposure — lead-based paint, lead-contaminated house dust and soil, and water from corroded lead pipes.

Demolition practices are linked to the health effects of lead exposure, including problems with thinking, attention and antisocial behavior. No level of lead in the blood is considered safe.

The model ordinance includes steps to let people know about demolition in their community and best practices to control dust: first, through wetting a structure before and during demolition and careful cleanup and ground cover afterward.

To fund demolition projects, the report outlines the three main federal, state and county sources administered by Allegheny County. It includes demolition funding available to other nearby counties, including funds available through Act 152, through which counties can enact a new $15 deed and mortgage recording fee to use for the demolition of blighted property.

Jeaneen A. Zappa, executive director of the South Side-based Conservation Consultants Inc., is a member of the working group and is watching over a pilot project to check the effectiveness of demolition practices in the region. Similar projects are recommended in the IOP report.

That means testing paint and soil, measuring wind speeds on demolition days, access to water to supply the wet-wet-wet demolition practice of wetting down the area before, during and after a building comes down.

“We’re working with the Tri-COG Land Bank on lead-safer demolition specifications,” Ms. Zappa said, adding that they have consulted with Baltimore on their practices and have resources from other nonprofits to help, and are looking for a donated water truck to provide water on sites where no other water is available.

“Every demolition contractor is different,” she said, citing as an example contractors who carefully remove pipes and other materials that can be salvageable.

“We want to get down to the actual dollars and cents on what it costs,” she said. “It’s a legitimate thing for good government, to be good stewards of resources. It’s equally important for good government to protect public health.”

Preventing property from decline and children’s exposure to lead could be further addressed with a lead-safe rental registry, Ms. Zappa said, and she sees that as a reasonable next step, particularly for municipalities in Allegheny County that already have rental registries.